The rotary encoder control works by switching between screen buttons on each push of the encoder button. The button that is activated is highlighted in blue when active, non-buttons that have actions are highlighted in red. Turning the encoder clockwise or anti-clockwise will change the option and activate it immediately. When the station name is red you can tune manually (the station name will change to 'User' after the frequency has been changed).

Having reviewed my code it is difficult to describe in detail exactly which changes need to be made to add rotary encoder control. However, as far as I am aware I have put a comment including the word 'rotary' in every place where I have added code for this reason.

If you want to backport the rotary encoder code to the STM32F4 board I suggest you search all the code for the word 'rotary' - grep -r rotary * - and take it from there.

There are three main additions of code to support the rotary encoder. There is a:

Adding the external LCD involved a lot of digging around in low level LCD controller code. It must have affected my brain because now I cannot see what I changed to make it work. There's some pin definitions for the LCD in main.h, maybe that's all it needs but I am sure the STemWin GUI controller is defined somewhere. If you want to look into this area then the file LCD_X_8080_8.h would be a good place to start.

A video of the rotary encoder/LCD combination will be posted here shortly.

The code is available on github link


This post assumes that the RF pre-amp and audio out circuits have been built as described by I2PHD in his original paper found under the ARM Radio section of his website.

Microprocessor - STM32F746-Nucleo board.
LCD - ILI9341 driver, looks the same as this one
Rotary encoder with integrated push switch

In the next post I will describe the code I have added to support the rotary encoder functionality as well as the changes to the screen layout.

The cide is available on github link 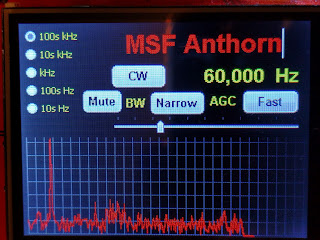 However, I soon found that the STM32F7 Disco board does not make the same GPIO pins available to use. Specifically only the third analogue-digital converter (ADC3) of three is available to use. Alberto's design uses ADC's 1 & 2 in double buffered mode and this approach is fundamental, consequently I realised that I would not be able to use this board for the receiver. By the time I had worked this out ST had released the STM32F746-Nucleo board, this board is similar to the Discovery board except it makes all the GPIO pins available to use but it does not have a built in LCD display.

I was not able to compile the source code written for the F4 board for the F7 board. Whether this was through my lack of experience or for some other reason I do not know as the code is meant to be compatible between the two devices. Subsequently, I proceeded to rewrite the code to use the Hardware Abstraction Layer (HAL) provided by ST. Due to the fragmented and incomplete nature of documentation for the HAL a great deal of experimentation and trial & error was involved. However, this did mean that my understanding of C programming for embedded microprocessors and associated debugging using gdb increased quickly.

Currently the status of this project is as follows:
* I have looked at using the newer 1.5.1 HAL firmware but there have been significant changes made to the operation of some of the functions and I don't intend to rewrite the code to handle these at the moment.

The picture at the top of this post shows the receiver receiving the MSF time signal on 60kHz.

I plan a series of blog posts to document this project. My plan is for posts covering the following topics:
The code is available on github link
Posted by simonhk (G0FCU) at 17:55 No comments: