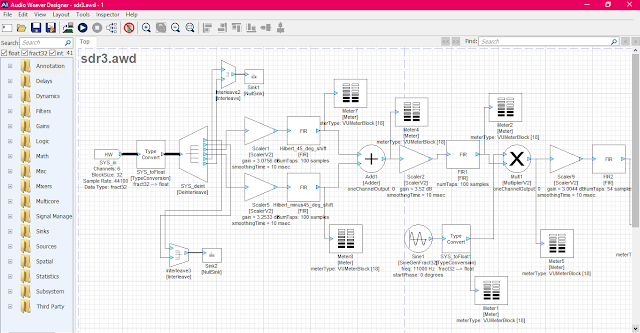 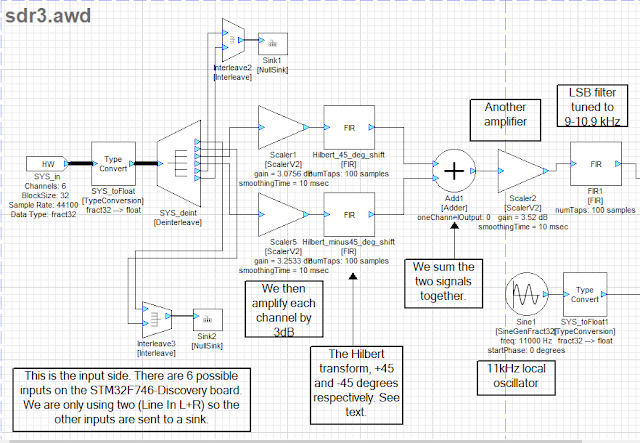 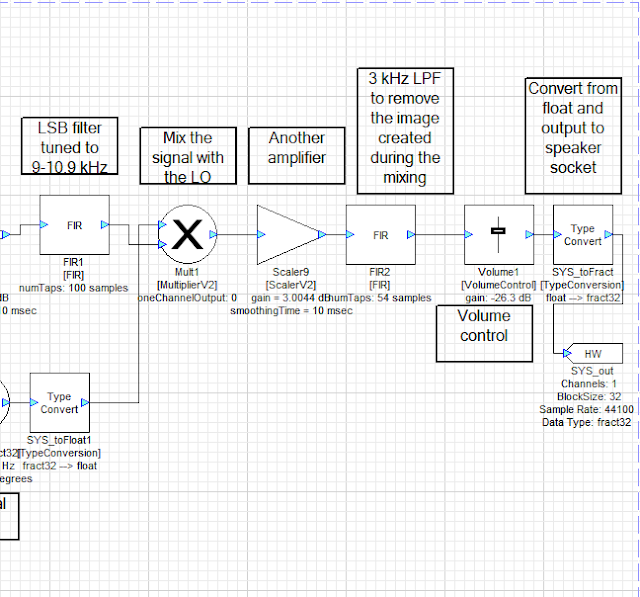 Homebrew SDR HF Transceiver - Listening to the receiver in SDR#

The large central spike is, I think, bleed through from the local oscillator signal.

My next task is to measure the loss in the receiver and also look at whether there is a ground loop problem.

Next post: Introduction to the microcontroller processing.
Posted by simonhk (G0FCU) at 17:14 No comments:

We are now at the point where we need to take the signal from the Si5351, divide it by 4 and produce two outputs, one of which is 90 degrees out of phase from the other.

A good tutorial on this process is here although we will divide by 4 rather than 2. The datasheet for the 74HC74 is here. The 74AC74 and 74HC74 are more or less interchangeable, the difference being that one can handle higher frequencies than the other.

There are many circuits on the Internet for quadrature dividers but I used one that is used in the SoftRock Ensemble receiver, here. The only difference being that the outputs to QSD CLK0 & CLK1 are not used, however, note that pin 9 does need to be connected to pin 2 (it took me a while to figure that was the reason I couldn't get it to work). Pin 14 is fed with 5V from the 7805 regulator and pin 3 is fed from CLK0 output on the Si5351. The outputs from pin 5 and 8 are individually fed to the LO ports on ADE-1 #1 and ADE-1 #2.

Below is my version, it looks a bit messy but it works. 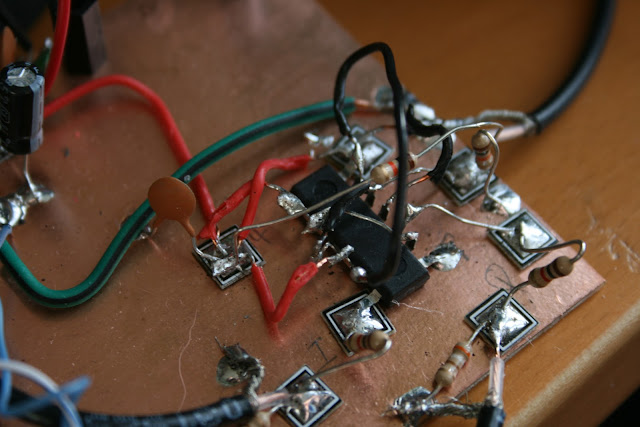 The screenshot from my oscilloscope shows the two out of phase outputs from the quadrature divider in yellow and blue. The purple line shows the that these two outputs have been divided by 4 and are at a frequency of 7.100 MHz.

We are now ready to see what this thing can receive by taking the I & Q outputs from the audio LPF's to a stereo jack plug (I to left channel, Q to right channel or vice versa plus ground) and plugging it into our computer to listen to the signals using SDR# but finally a picture of the completed RF splitter, mixer, AF low pass filter, regulator, quadrature divider board. 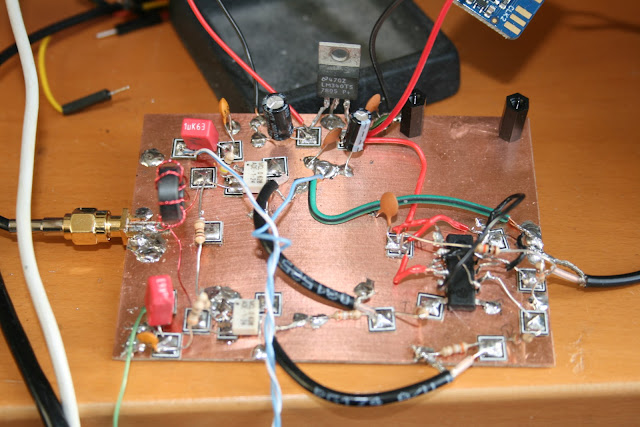 I was going to mount the Si5351 breakout board onto the two posts top right but I think the board uses imperial screw size holes as my M3 screws will not quite fit.

Next post: Connecting to SDR#
Posted by simonhk (G0FCU) at 16:22 No comments:

The Si5351 is "...an I2C configurable clock generator that is ideally suited for replacing crystals, crystal oscillators, VCXOs..." That is to say that it can generate frequencies from 2.5 kHz up to 200 MHz. Adafruit Industries produce a breakout board with the Si5351 chip and other required components installed for under $8, this allows us to interface with a microcontroller, e.g. Arduino, and control the frequencies produced very easily. The breakout board allows us to generate three frequencies but for this project we will only be using one of the outputs. We will produce a frequency that is four times the LO frequency we require, when the signal goes through the quadrature divider (74AC74 flip-flop) it will be divided by four to produce the LO frequency.

Adafruit Si5351 breakout board on the left, Arduino Uno on the right. 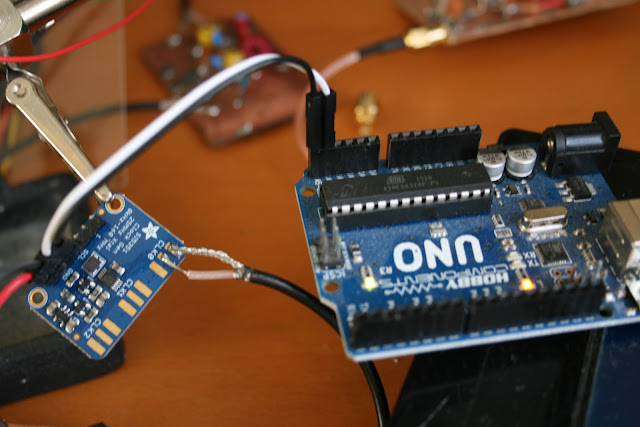 You will need to install the Si5351 library by following the instructions here.


/*
* si5351example.ino - Simple example of using Si5351Arduino library
*
* Copyright (C) 2015 Jason Milldrum <milldrum@gmail.com>
*
* This program is free software: you can redistribute it and/or modify
* it under the terms of the GNU General Public License as published by
* the Free Software Foundation, either version 3 of the License, or
* (at your option) any later version.
*
* This program is distributed in the hope that it will be useful,
* but WITHOUT ANY WARRANTY; without even the implied warranty of
* MERCHANTABILITY or FITNESS FOR A PARTICULAR PURPOSE.  See the
* GNU General Public License for more details.
*
* You should have received a copy of the GNU General Public License
* along with this program.  If not, see <http://www.gnu.org/licenses/>.
*/

When you run the Arduino sketch you should be able to hear the output from the Si5351 on an HF receiver at 28.4 MHz

The ADE-1 is a passive device with an RF and LO input and an IF output. Two ADE-1's are used with the RF port on each being fed with output from port 1 and 2 of the RF splitter respectively (Note: I changed the design of the RF splitter from that which I first published, here is a link to the updated page). The LO ports will be fed from one of the two outputs of the 74AC74 flip-flop respectively. The output of the IF ports goes to an audio frequency LPF (one LPF per port).

The theory behind how the I & Q signals are produced are described in this excellent YouTube video by Craig, devttyS0. In short the LO outputs are produced by dividing the signal from the Si5351 by 4, there are two outputs from the 74AC74 at the LO frequency and one is 90 degrees out of phase from the other. When each one of these is mixed with the RF in the ADE-1 we end up with two outputs at baseband audio frequency, I & Q, one being 90 degrees out of phase from the other as shown below:

Below you can see a picture of the RF splitter, ADE-1's and audio LPF's. The 7805 and assorted capacitors in the top right is the 5V supply for the 74AC74. 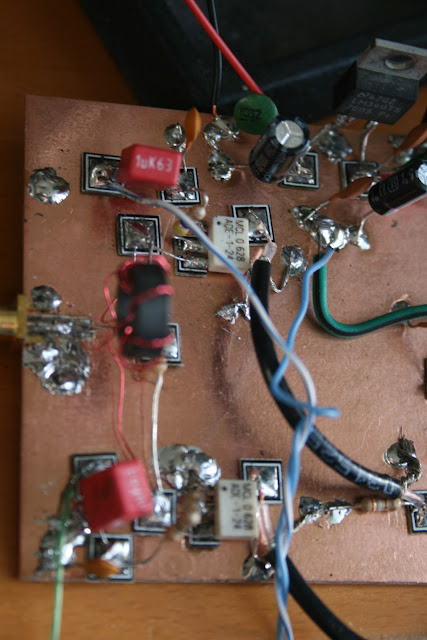 I note from devttyS0's video that the FST3253 device removes the need for the two ADE-1's by implementing a Tayloe Detector - something to be tried.

The RF splitter is used to split the incoming RF into two equal parts. These individual signals are then used as input to the ADE-1 mixers that produce the I & Q signals (90 degrees out of phase). Obviously you don't want to lose too much power in the splitter circuit and you want to ensure that the two output signals are of equal magnitude.

Update: 27 Dec 2017. The splitter design I originally used did not produce zero phase difference. Hence I have updated this page with another design.

I built this splitter based on a design from EMRFD (Experimental Methods in RF Design, Hayward, Campbell & Larkin), specifically the one from the 18 MHz transceiver shown in Fig. 11.14.

The schematic is below:

My built version can be seen in the picture below. 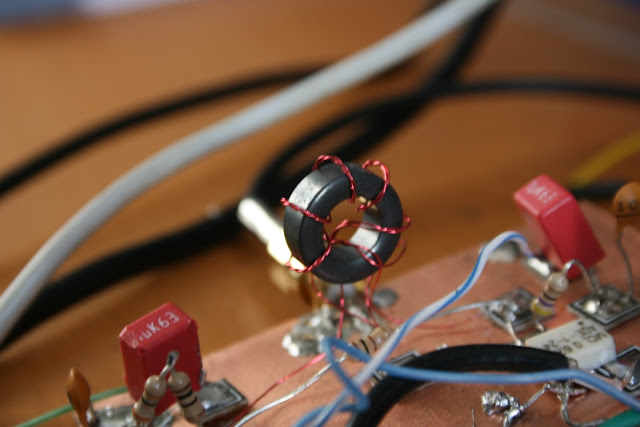 The picture below shows the outputs from ports 1 and 2. They are equal in amplitude and in phase which is perfect.